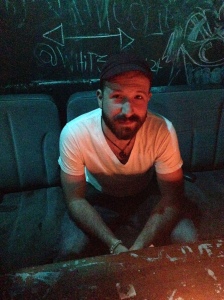 Remy loves all forms of art and likes to explore the many ways in which he can create. His subject matter ranges from violent, gory, and gross to silly, cheesy and cute. An artist with a strong affinity towards shapes, simple composition and colors, he enjoys working in black and white as well. From his mind, creatures, characters and lovely little scenes are created with pens, pencil, paint and computers. He has completed work in photo manipulation, 3D animation, and video compositing.

In 2014, Remy became a self published illustrator and writer. Over the years, his artwork has been featured in the indie horror film series “Tape Me” and he has retouched and composed promotional photos for the indie action-horror film “Turn”. His paintings have been a part of Big Snow’s Monster Jammin’ Party gallery. In addition, some of his designs were in SunChoke’s Seasonal Art Show Magazine.

More recently Remy was a part of the VFX company Psyop Productions. Where he was able to pitch creative ideas as well as provide technical insight on projects when creating digital media for clients such as Google, Apple, Microsoft, Samsung, Honda, Philip Morris, Nike, Cricket Wireless, JBL, Supercell, Coca-Cola, Ubisoft, Riot Games, and AirBnB. He was also featured as one of Psyop’s featured 2016 Inktober Artists.

Remy has been recording original music in his bedroom since 2008. He performs live shows as Remy Lexington in venues throughout New York City and Long Island. Sometimes he is accompanied with a full band. His sound is considered to be one of a lo-fi, indie-punk, alternative vibe. Remy also has two self recorded albums out and one self recorded EP.

“I enjoy being a creative in every sense of the word. I enjoy working with other artists and the wonderful vibes that collaboration produces. I will make art until the day I die. We all have an artistic fingerprint. I hope that you enjoy mine.”

-We are aging Wizards, We are always learning new magic tricks-